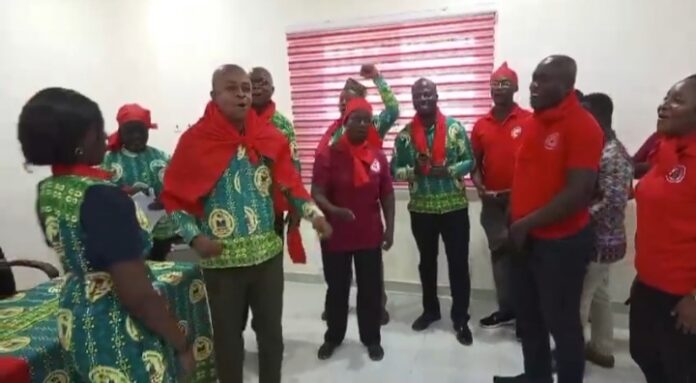 The Western Regional Secretariat of the National Association of Graduate Teachers (NAGRAT) have issued an ultimatum to government threatening to lay down their tools by the end of June 2022, if government fails to heed their call for the 20% Cost of Living Allowance, CoLA, to its members.

“We have come to our wits end, we can no longer bear the pain, we, therefore, demand of our National Leadership that if at the end of June 2022, our call for CoLA, is not heeded to, we have no option but to pay heed to the clarion call for our members to lay down our tools”.

The Western Regional Chapter like their compatriots in other parts of the country have cited recent economic hardship, increasing inflation rate, and government’s introduction of the e-levy as major factors taking a toll on teachers’ standard of living.

Addressing the media at a news conference in Takoradi, the regional chairman of the association, Justin Nelson described the government as insensitive as, it has failed to yield to their numerous calls for an upward adjustment in salaries to cushion workers in these trying times.

“When prices of goods and services started escalating, NAGRAT made a clarion call to the government for an upward adjustment in salaries to cushion workers, similar calls were made by CCT, TEWU,

He continued, “again at the 2022 National May Day parade, the Secretary-General of TUC, reiterated the issue of CoLA to the President, but has been met with deafening silence from the corridors of power, a clear indication of a government that is insensitive to the basic needs of its people” to underscore the fact they will not hesitate to go on strike if by the end of the month government does not yield to their calls.