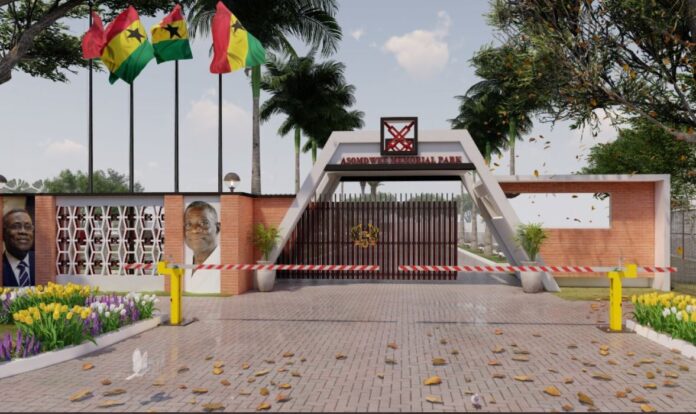 The family of the late President John Evans Atta Mills is incensed that not a single member has been officially invited for the supposed 10th year anniversary to be held at the Asomdwee Park, where the mortal remains lie, on Sunday, July 24.

The Asomdwee Park was recently given a facelift apparently in readiness for the 10th anniversary ceremony of the passing of the late Professor.

The renovation works were carried out by the Coastal Development Authority (CoDA).

The Atta Mills Institute headed Samuel Koku Anyidoho, then Presidential Spokesperson of the late President, is said to have played a pivotal part in the refurbishment of the facility and leading the programme of activities to mark the anniversary.

But speaking on Friday, July 22, when he was installed as the Family Head of the Nkuma Kyereba Twidan of Cape Coast, Dr Cadman Mills, the brother of the late president, said he is “shocked” and “saddened” that no family member was officially invited for the occasion.

He is, therefore, calling on President Nana Addo Dankwa Akufo-Addo not to engage in any slight at the family by attending the event.

“I don’t know whether President Akufo-Addo [knows] that we’ve been slighted as a family and that we have not been invited,” Dr Cadman Mills stated.

“If he knows, he would do the family an honour by withdrawing his patronage of this function.”

The accomplished economist also called on well-meaning Ghanaians not to attend the event at Asomdwee Park on Sunday even if they have been invited “to show solidarity with the family”.

“We will be very happy if you show solidarity with us and therefore not to attend a function concerning the earthly remains of Professor John Evan Atta Mills on the 10th anniversary of his passing away without inviting one single member of the Atta Mills family.”

Dr Cadman Mills said the late President’s wife, Naadu, might have been invited but that does not negate the concerns raised by the family.