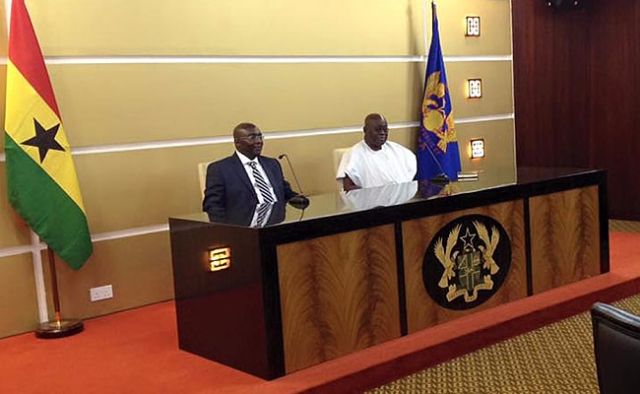 The government has held a four-day retreat at the Presidential Lodge in Peduase to discuss the economy, take stock of programmes and chart a path for growth.

The retreat, the second this year, which had almost all members of government present, started last Friday and discussed the various flagship programmes, how to communicate government programmes effectively and the reason for accessing International Monetary Fund (IMF) programmes.

The retreat, according to our sources, also reviewed the cost-cutting measures announced at the last Cabinet meeting in March this year and assessed their performance which, according to the figures, were yielding some dividends.

All members of government and appointees took part in the retreat. They included all ministers and deputies, metropolitan, municipal and district chief executives; chief executive officers appointed by the President and presidential staffers.

Unlike other retreats, the government functionaries parked their vehicles and joined buses to Peduase.

Other sources, who took part in the meeting, revealed that many of the issues discussed surprised participants, especially about the quantum of work being done on the ground.

“The meeting produced loads of information that will help members of government to communicate better with facts and figures,” one of the sources said.

Aside from the plenary meetings, President Nana Addo Dankwa Akufo-Addo was still holding special meetings with various groups of government appointees at the Jubilee House yesterday.

They include Cabinet ministers, other ministers of state, regional ministers and their deputies, MMDCEs, chief executive officers appointed by the President, presidential staffers and persons who communicate with the external publics.

The Minister of Information, Kojo Oppong Nkrumah, is expected to issue a statement on the outcome of the meetings soon, a source disclosed.

The source added that the participants in the meeting were upbeat that the economy would bounce back after the challenges that had affected the economy.

It said contrary to expectations, it became clear that an IMF programme would not lead to the discontinuation of social intervention programmes because such programmes had survived two IMF programmes already.

A similar retreat in March this year announced measures to save about GH¢3.5 billion for the rest of the year. The measures took effect from April 1, this year.

The measures, announced by the Finance Minister, Ken Ofori-Atta, a couple of days after the retreat, included new expenditure cut measures such as 10 per cent more cut of discretionary spending; slashing of fuel coupons to government appointees and machinery by 50 per cent as well as a cut of 30 per cent from salaries of ministers and the heads of state-owned enterprises to be lodged in the Consolidated Fund.

“Cabinet approved that ministers and the heads of SOEs should contribute 30 per cent of their salaries from April to December 2022 to the Consolidated Fund. We would like to thank the Council of State for their leadership in complementing government on this policy,” Mr Ofori-Atta said.

The measures also imposed a moratorium on the purchase of imported vehicles for the rest of the year.

The minister said that measure would affect all new orders, especially four-wheel drives.

IMF Bailout: We shall surely bounce back – Alan