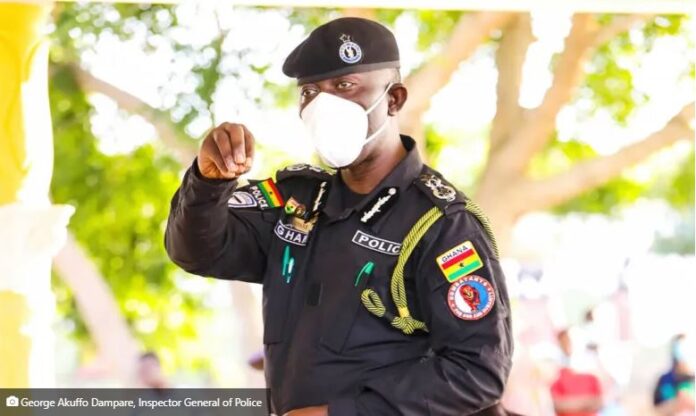 The Inspector General of Police(IGP) says it is inappropriate for any researcher to exclude CHRAJ and Ghana Statistical Service from corruption surveys.

A research conducted by the GSS in collaboration with CHRAJ and UNODC ranked the Ghana Police Service as the most corrupt institution in the country.

According to the survey, more than 17.4 million bribes were paid in 2021 as Police officers shot to number one in respect of officials who take bribes with 53.2%.

The IGP in his letter dated July 27, 2022 and addressed to GSS, CHRAJ, and the UNODC however, wondered why the two institutions – CHRAJ, GSS did not include themselves in the survey.

He argued that both GSS and CHRAJ likewise interface with the public on a daily basis as a public entity, a situation that clearly makes the two institutions candidates for a corruption investigation.

“More importantly, a further scrutiny of the report shows that your two institutions (CHRAJ and Ghana Statistical Service) were also not part of the research and we are wondering why you do not think they are also candidates for corruption investigation, considering that they also provide critical services to the public,” the IGP, Dr. George Akuffo Dampare stated.

The Inspector General of Police(IGP) has responded in strong opposition to the maiden corruption survey conducted by the Ghana Integrity of Public Services Survey(GIPSS) that seeks to label the Ghana Police Service as the most corrupt institution in Ghana.

In a five-page reply to the three institutions that conducted the survey, namely, the Ghana Statistical Service (GSS), Commission on Human Rights and Administrative Justice (CHRAJ), and the United Nations Office on Drugs and Crime (UNODC), the IGP, Dr. George Akuffo Dampare punched holes into the methodology used to conduct the survey.

“Our discomfort, therefore, is the use of selective ranking methodology to project the outcomes in a manner that puts an unfair focus on the Police Service with all the others in your corruption index escaping public scrutiny,” he criticised.

For him, the findings of the research are “heavily challenged and corrupted from both the academic and practice point of view.”