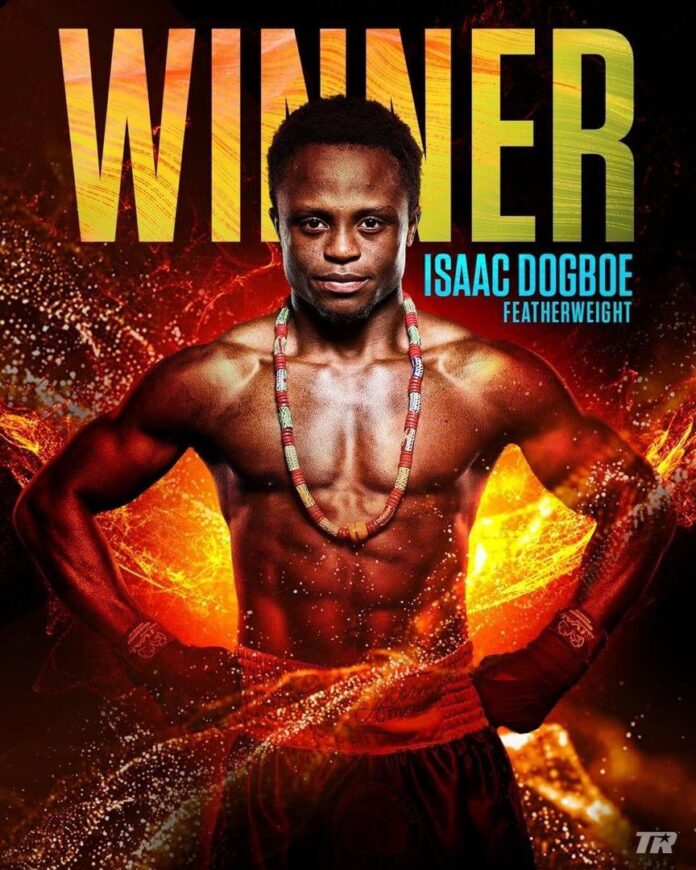 Ghanaian Boxer, Isaac “ Royal Storm” Dogboe is back in the reckoning for another world title after he defeated American Joet Gonzalez on Saturday at the Grand Casino, Hinckley, Minnesota in a close fight.

Dogboe who began the scheduled 10-rounds contest on a fast note took control in the early rounds until he got hit by a power punch in the fourth round which slowed him a bit in the ensuing rounds. Dogboe however picked up the pieces to get back into the contest by winning some of the crucial rounds.

Dogboe’s corner kept urging him on to go for the kill as the fight progressed but Gonzalez being a stubborn customer stuck to his grounds to push the contest to its conclusion leaving the decision in the hands of the Judges.

Although a close contest , the three Judges felt Dogboe did quite enough to clinch this all important victory. The Judges scored the bout 96-94, 96-94 for Dogboe and 96-94 for Gonzalez giving the Ghanaian a Split Decision victory.

Dogboe in the post bout interview expressed his excitement in representing the WBO and WBC in the Featherweight division. He further threw a straight shot at the current holders of the two belts to be on the look out because he is back.

“I want to thank the WBO, I am proud to be representing them once again and also WBC. And whoever the champions are they should watch out. The Royal Storm. I am back baby.”

The Royal Storm by this victory becomes the number one contender for both the WBC and WBO Featherweight titles currently held by Rey Vargas and Emmanuel Navarette respectively. He is also now the new WBO International Featherweight Champion.