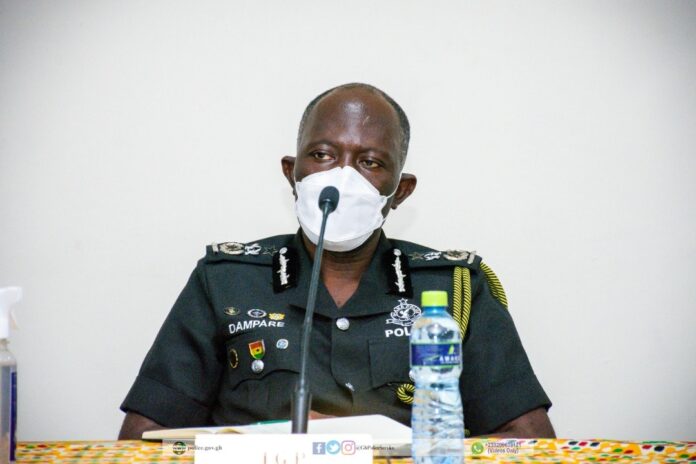 The Inspector General of Police(IGP) has responded in strong opposition to the maiden corruption survey conducted by the Ghana Integrity of Public Services Survey(GIPSS) that seeks to label the Ghana Police Service as the most corrupt institution in Ghana.

In a five-page reply to the three institutions that conducted the survey, namely, the Ghana Statistical Service (GSS), Commission on Human Rights and Administrative Justice (CHRAJ), and the United Nations Office on Drugs and Crime (UNODC), the IGP, Dr. George Akuffo Dampare punched holes into the methodology used to conduct the survey.

“Our discomfort, therefore, is the use of selective ranking methodology to project the outcomes in a manner that puts an unfair focus on the Police Service with all the others in your corruption index escaping public scrutiny,” he criticised.

For him, the findings of the research are “heavily challenged and corrupted from both the academic and practice point of view.”

A research conducted by the GSS in collaboration with CHRAJ and UNODC ranked the Ghana Police Service as the most corrupt institution in the country.

According to the survey, more than 17.4 million bribes were paid in 2021 as Police officers shot to number one in respect of officials who take bribes with 53.2%.

But the IGP in his reply insisted the findings of the research appear to be “a historically pervasive stereotyping of the Police Service.”

“The Service has almost now become the default institution of choice for such research and has therefore encouraged a deep-seated public stereotype over the years.”

“This stereotype may easily influence respondent choices and it is therefore fair to expect that you factor it in assessing the validity of your findings,” Dr. George Akuffo Dampare noted in his statement.

Below are highlights of the IGP’s response

We would appreciate your response to the following concerns to enable us understand your research outcomes and also further shape measures being implemented by the Service to improve our service delivery.

i.         It has been observed that the research did not cover some other public institutions such as the Ghana Ports and Harbours Authority, Ghana Civil Aviation, Audit Service, Parliamentary Service, Ghana National Fire Service, Gaming Commission, Public Media houses, National Disaster Management Organisation (NADMO),  Narcotic Control Commission (NACOC), the Attorney General (AG’s) Department, the Registrar Generals Department among others and these are all institutions, we believe, that the public deals with regularly.

ii.         More importantly, a further scrutiny of the report shows that your two institutions (CHRAJ and Ghana Statistical Service) were also not part of the research and we are wondering why you do not think they are also candidates for corruption investigation, considering that they also provide critical services to the public.

iii.         We also noticed that some institutions such as the Ghana Revenue Authority (GRA) was disaggregated into components with one part touching on Customs officers and another part on tax officers. Another example is the Ghana Health Service where you had doctors, nurses and midwives in one group and other health workers in the public hospitals constituting the other group.  Even some other institutions such as public utility services, which include the Ghana Water Company, Electricity Company of Ghana and others were aggregated as one.  One wonders why the lack of consistency in your approach.

iv.         In addition, in some instances you combined different institutions as one entity; for example, prosecutors are not part of the judicial service but you put them together as one. Also, teachers and lecturers, though both operate in the education sector, they do not belong to the same institution but were lumped together.  This seems to us to be a clear case of combining mangoes and oranges to corrupt the flavour of each.

vi.         We Know that there are three branches (arms) of government, namely the Executive, Legislature and Judiciary. From our understanding, most of the institutions covered in your research are under the Executive branch and yet, you also introduced another institution named the Executive Branch of Government without offering any explanation as to what it constitutes. Your comment on this will be helpful.

vii.         We have also read that you used some multiple levels of quality assurance to eliminate errors in your research, but looking at the report, we believe we have good reason to be sceptical about this quality assurance mechanism.  For example, we wonder whether you made any attempts to verify and authenticate from any of the affected institutions the credibility of the information given you by the interviewees since we cannot feel that in the research.

Viii.         Using your contacts-based and the value-based ranking methods for your analysis, we would like a regional, monthly and departmental breakdown of your findings for the Police Service to enable us pinpoint where the issues are and tackle them.

ix         We also did not see any specific recommendations in the report and we find it surprising that a major research like this did not offer any recommendations and solutions.

x.         There is also the real risk that your research may have been affected by a historically pervasive stereotyping of the Police Service. The Service has almost now become the default institution of choice for such research and has therefore encouraged a deep-seated public stereotype over the years. This stereotype may easily influence respondent choices and it is therefore fair to expect that you factor it in assessing the validity of your findings.

Xi.  From the foregoing, it is our considered view that the research and its findings are heavily challenged and corrupted from both the academic and practice point of view.

XII.   We want to place on record that we are passionate about this since the continuous empirically and scientifically unsubstantiated labelling of the police as the most corrupt institution in the country only goes to feed this perception and damage the reputation of the Police Service as well as weaken the morale of its personnel. As we have all now come to accept, perception tends to be more powerful than reality and therefore we have no choice than to share our position on this matter.