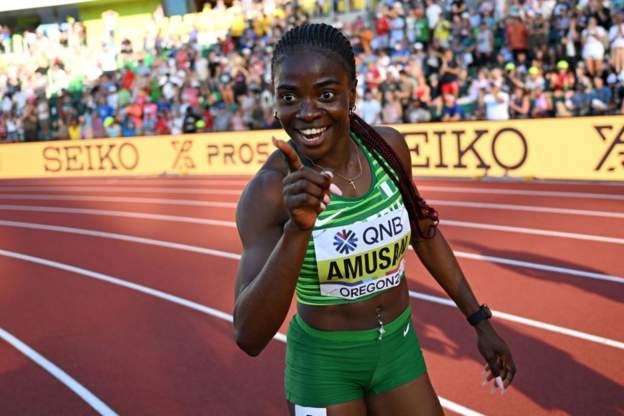 Nigeria’s Tobi Amusan has won gold in the women’s 100m hurdles at the World Athletics Championships in the United States.

The 25-year-old broke the world record in the semi-finals with a time of 12.12 seconds. Her time beats the 12.20 seconds set by American Kendra Harrison, who finished second behind Amusan, in 2016.

Amusan went on to win gold in the final, two hours later.

She ran even faster in the final (12.06s), but due to a strong tail wind this will not be registered as a record.

Tears of joy flowed down her face as the Nigerian anthem sounded in the Hayward Field stadium, Eugene, Oregon, for surely the greatest and proudest night in these championships for Nigeria.

A BBC journalist tweeted some of the moments after her win:

What a night it was for Nigeria as they waited the very last day to put themselves on the medals board.

It could have been two golds on Sunday night for the country as long jumper Ese Brume led the field for a while with a 7.02m jump, until German (with Tanzanian roots) Malaika Mihambo bettered her on her fourth attempt (7.09m) and even went further on her last attempts (7.12m).