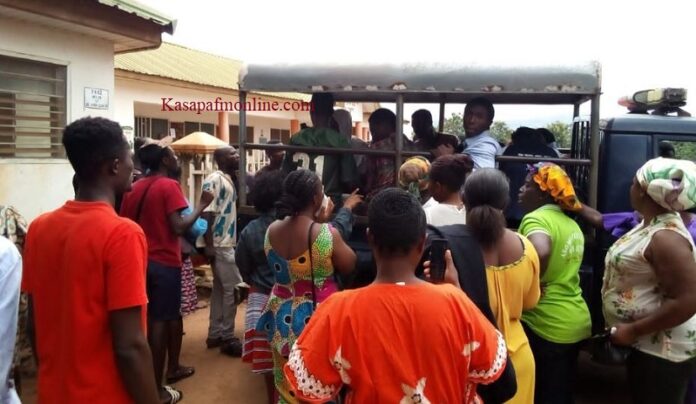 They were charged with conspiracy to commit crime to wit threat of harm, threat of harm, being on premises for an unlawful purpose, and Possession of restricted drugs without lawful authority.

The Prosecuting Officer, Chief Inspector Barnabas Mends told the court that, on July 5, 2022, it came to the notice of the teachers of Akyem Anyinasin Methodist Junior High school that some of the students were using drugs in the school. The teachers later established that a student by the name of Amoako, nephew of accused chemical seller Gyentu Darkwa took the drug diazepam from the drug store of his Uncle and send it to the school and gave to his classmates.

On July 26, 2022, between 9:40 pm to 10:50 pm, the accused persons(excluding the drug store owner), and others at large who were armed with clubs confronted the complainants in the case -Owusu Asabre, 28, Asamoah Kissi Stanley,27, and Boafo Evans ,29, all teachers in the school to intimidate them.

In the process, they forced one of the teachers -Owusu Asabre to kneel for minutes as his punishment.

They subsequently threatened to harm the teachers if they joke with them.

They had also threatened the teachers earlier own for alleging they supplied the Diazepam (D10) drug to the students.

On July 27th, the Parents Teachers Association(PTA) called a meeting on the matter but the accused persons stormed there to distract the meeting.

On July 29, 2022, an official report was lodged at the Police station which led to the arrest of the accused persons on August 1, 2022.

Police established that Diazepam is a restricted drug that must not be sold at a drug store.

The court after taking the plea of the accused persons remanded them to reappear after a week but referred Annor Benjamin, 17, a student at W.B.M Zion Senior High School formerly AMEZSS, and Tiboah Addo Samuel, 17, a student of Koforidua Secondary Technical to a Juvenile Court.

Family members, the accused persons flooded the court premises. Some could not hold bag their tears when the court remanded them.

The Municipal Chief Executive for Abuakwa North, Alhaji Umar Bodinga who was in court said the assembly will not tolerate drug abuse and attacks against teachers hence the Prosecution will serve as a deterrent to the youth.

Meanwhile, the Ghana Education Service has reopened Anyinasin Methodist JHS which was closed down on Friday, July 29, 2022, following the incident.