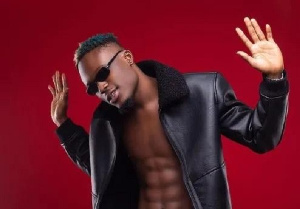 Sensational Ghanaian rapper and “Na Today hitmaker Okese 1 has said that he does not need to jump on other artistes’ fame to produce hit songs.

In an interview with Kwame Bee of Diwulane Mu drive time show on Kasapa 102.5FM, the rapper revealed that coming up as a musician he had no plans to collaborate with any artiste in the industry.

Despite other artistes searching for similar possibilities to be featured, he believes he has the capability of building his own brand.

“I have some vibes built in me which is my craft, even if I don’t get anyone on my songs I know what am bringing out” he stated.

Okese 1, who has only been in the music business for two years, says he does not have a favorite artiste because he respects everyone’s artistic vision.

The rapper appears to reject many requests for collaboration from other musicians, stressing that he will only engage when he is ready.

The rapper is currently promoting his new single dubbed “OPP”.

His music is available for download on all streaming platforms.