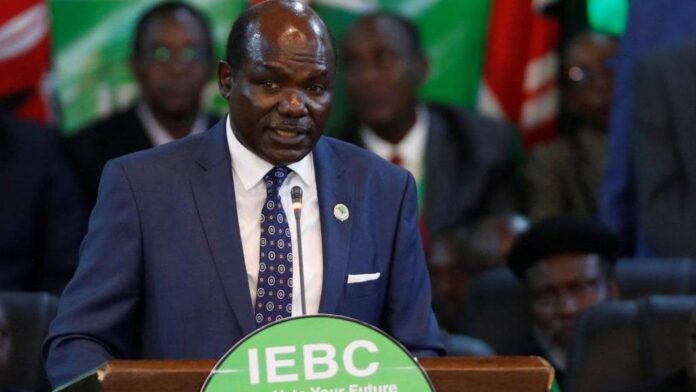 The body of Daniel Mbolu Musyoka was found near Mount Kilimanjaro, a long way from his base in the capital.

The reasons behind his death are unknown, but the news has added to the sense of anger in the wake of the disputed presidential election result.

Although in general this has so far been one of the most peaceful election periods in Kenya’s history, the chair of the electoral commission, Wafula Chebukati, said other staff members had been arbitrarily arrested and had faced intimidation or harassment.

Monday’s announcement of the result was delayed amid scuffles at the results centre and allegations of vote-rigging, made by Mr Odinga’s campaign.

He is due to break his silence shortly – but an ally told the BBC that Mr Odinga did not find the result “acceptable at all”.

“It has no credibility because four of the seven [election] commissioners have said they did not sign on to the announcement that Mr Ruto was lawfully elected,” Salim Lone said.

He was referring to the fact that the commissioners had refused to endorse the presidential result, saying the way it been handled was “opaque”. They did not give any further details on Monday.

President Uhuru Kenyatta, who was backing Mr Odinga to succeed him after completing two terms, has also not been seen in public or made any comments since election day 9 August.

Calm has returned to most parts of the country after a mixture of celebrations and violent protests after the results were declared on Monday evening.

In Mr Ruto’s hometown of Eldoret in the Rift Valley, thousands of residents broke into song and dance. But the mood was different in Mr Odinga’s political base in the western city of Kisumu where residents set up burning tyres and barricades to protest the loss.

Most shops remain closed in Kisumu.

In his acceptance speech, Mr Ruto called for unity, saying he wanted to be a president for all, and for the country to focus on the future.

“To those who have done many things against us, I want to tell them there’s nothing to fear. There will be no vengeance. We do not have the luxury to look back,” he added.

At a press conference after he was declared the winner Mr Ruto revealed that he had spoken to Mr Odinga earlier on Monday.

“I called my competitor and had a discussion with him and we agreed that whatever the outcome of this election we should have a conversation,” he told journalists.

He also lauded the electoral commission chairman for conducting a transparent election.

This was the first time Mr Ruto, 55, had run for president. He has served as deputy president for nine years, but fell out with President Kenyatta, who refused to endorse him.

Mr Ruto had framed the election as between “hustlers” – poor Kenyans – and “dynasties” – influential families like the Kenyattas and Odingas who have been big players in the country’s politics since independence.

Unlike previous elections, the campaigns were dominated by issues such as how to address the cost of living, fix the economy and fight corruption. There was not the same level of mobilising ethnic vote as seen in previous elections.

Analysts believe that Mr. Odinga is likely to challenge the result.

The Kenyan Supreme Court annulled the last election in 2017 and ordered a re-run – it might have to make another big decision in a few weeks.