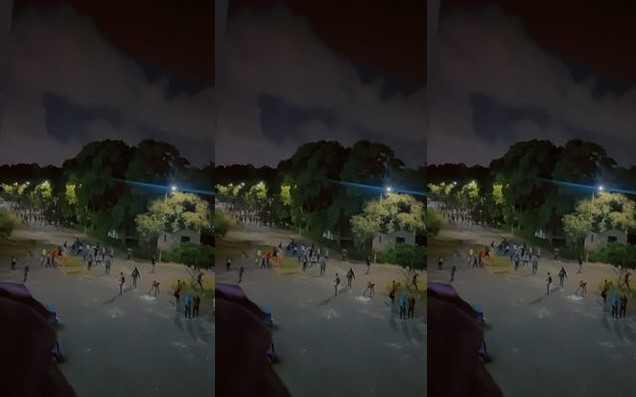 Students of Commonwealth Hall and Mensah-Sarbah Hall of the University of Ghana, Legon clashed on Friday night leaving some of them badly injured.

Unconfirmed reports say some Commonwealth Hall guys dressed in the Hall’s Lacoste shirt walking around the Legon Hall Annex close to Sarbah Hall were attacked by students of Sarbah Hall.

An Uber driver who had a Commonwealth Hall muffler in his car was also attacked by students of Mensah-Sarbah Hall and had the car’s windscreen smashed.

The victims of these attacks are said to have reported the incidents to their fellows at Commonwealth following which a group of students mobilized themselves to embark on a retaliatory attack on the Mensah-Sarbah Hall.

In a video in circulation, some of the students are seen in a fierce fight while others hurtled helter-skelter.

A car that had been parked was burnt by the students.

The police had a tough time bringing the situation under control and maintaining order on that part of the campus.

This is not the first time there’s been a clash between students of the two halls.

Students of the two halls about five years ago clashed ahead of the school’s matriculation of freshmen for the 2016/2017 academic year.

According to eyewitnesses, the clashes began when a member of Mensah-Sarbah was attacked by Commonwealth boys which led to a retaliatory reaction from the Mensah-Sarbah camp.

Reports indicate that the procession of some level 100 students to the Matriculation ground was ongoing when students began throwing stones.

There is said to be a long-standing rivalry between the two traditional halls which is demonstrated in sportsmanship and academics.

This however turns bitter and sometimes bloody on occasions like matriculation.