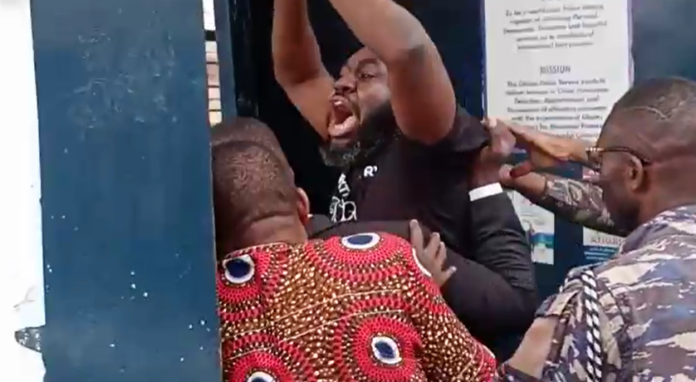 Oliver Barker-Vormawor, the lead convener of #FixTheCountry Movement says he was unlawfully detained for 35 days without being charged which sins against his fundamental right to a fair trial.

The accused person who made the point during his committal proceedings at the District Court in Ashaiman argued that there is “something wrong with this country.”

“My Lady, something is wrong with this country. Our democracy and all that we considered here about it is at the edge of being lost.”

He added that, “In its place, we have erected a system that thrives on abuse of rights.”

Addressing the court prior to being committed to stand trial at the High Court for two counts of treason felony, he said his committals was delayed for six months “so that the committal judge may accept hook line, and sinker everything the prosecution throws at the committal court.”

“I have been charged with two offenses – (1) treason and the other treason felony both found in the same charge (Count 1).

“I have also been charged with a second count which repeats the first Count,” he pointed out.

He said, “if I were to be committed to stand trial for offense which offends the rules against multiplicity and duplicity of the committal process makes no sense and operates only as a plot on my rights to speedy trial.”

“It seems bizarre to be that my rights to fair trial has been delayed for 6 months only so that the committal judge may accept hook line and sinker everything the prosecution throws at the committal court.

He said, “The committal proceedings are intended to protect citizens of the Republic from frivolous accusations and trump up charges by regimes that have lost moral decency to uphold the rule of law.

“Every person no matter how boisterous their dissent may be, every individual no matter how distasteful they may find the government, deserves the protection of our laws,” Barker-Vormawor told the court presided over by Mrs Eleanor Barnes Kakra Botwe.

“What purpose does the law serve if a six-month committals proceedings is both a mere formality and a rubber stamp process?” he asked rhetorically.

“So I have come before you judge, believing or where belief fails me, hoping that in as much as corruption and moral decay pervades, the soul of our now lost democracy some remnants of justice still live within these walls,” he stated.

“I have sought for that justice as I have watched you attentively for the past 6 months I have long for that justice period when they undertook this in the colonial way were with discomfort,” the accused noted in open court.

“Even though it mere presence in this Republic is a reminder of brutal violence our forebears fought against,” the accused told the court.

The accused person also told the court that he is not guilty of the offenses charged while telling the court how he believed in the country’s democracy growing up.

“I grew up as a little boy who had faith in our democracy….faith that no amount of unlawful detention and unclear trump up charge can kill.

“Am I guilty of the offense charged? Absolutely not. And this is not only because I don’t know which offense have been charged with clarity,” he asked.

“But also because I am explicitly opposed to violence in the brutal ways on those who oppressed us today. But I have also been a Ghanaian for long enough that whether I’m guilty or not, does not matter.

“In the country that held me in unlawful detention for 35 days, without any charges and held together by it, is perversion rather than it search for freedom, justice, probity and Accountability,” he concluded.