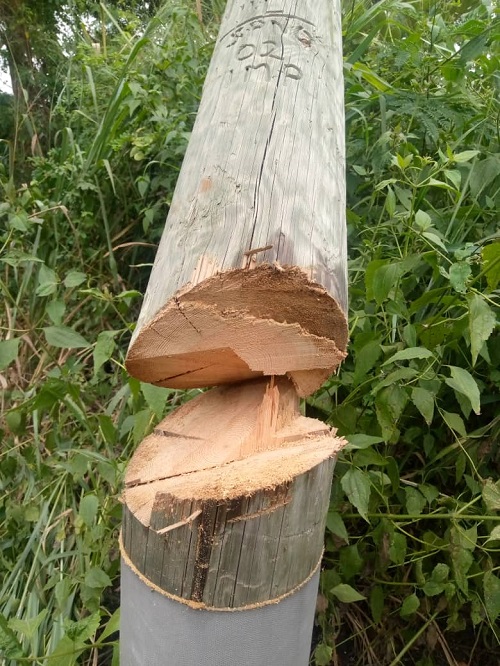 Pictures emerging from the media in Krobo area indicate that an unknown person has cut down high-tension wooden electricity poles with a chainsaw at Adelakope on the Tema, Akosombo high way in the Lower Manya Krobo Municipality of Eastern region.

The electricity lines connect power to communities such as Akuse junction, Akorley, and Aseseeso in the Okere district”.

The incident is believed to have happened last night in protest against a continuous power cut in the area.

“Unidentified persons reportedly around 11:00 pm cut off a high tension Pole with a chainsaw at Adelakope on the Tema, Akosombo high way in the Lower Manya Krobo Municipality of Eastern region which connects power to communities such as Akuse junction, Akorley, and Aseseeso in the Okere district”.Opambour Gyaman Simon, of Rite FM reported. 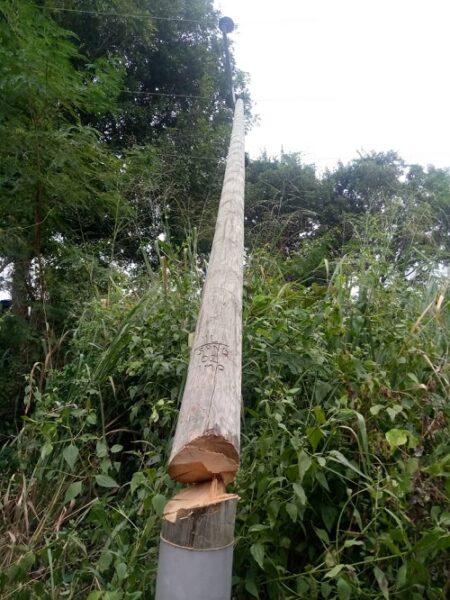 ECG neither confirmed or denied the incident when contacted.

The Electricity Company of Ghana, ECG, switched off feeders supplying power to Yilo and Manya Krobo municipalities on July 27, 2022, over attacks on its staff and tempering of its transformers by some unscrupulous residents resisting prepaid meter installations.

The power cut to the two municipalities is having serious implications on health, education, and the local economy.

The Yilo Krobos District Education Directorate has warned that second-cycle boarding schools in the Municipality risk closure if electricity supply is not restored in the coming days.

According to GES, this is unsustainable.

Meanwhile, parents are being asked to buy torchlights for their wards to learn particularly those writing the West Africa Secondary School Certificate Examination (WASSCE).

Furthermore, the management of Yilo Krobo and Lower Manya Krobo Municipal Health Directorates in a joint statement issued on August 1, 2022, warned of a public health emergency if power is not restored to their districts immediately.