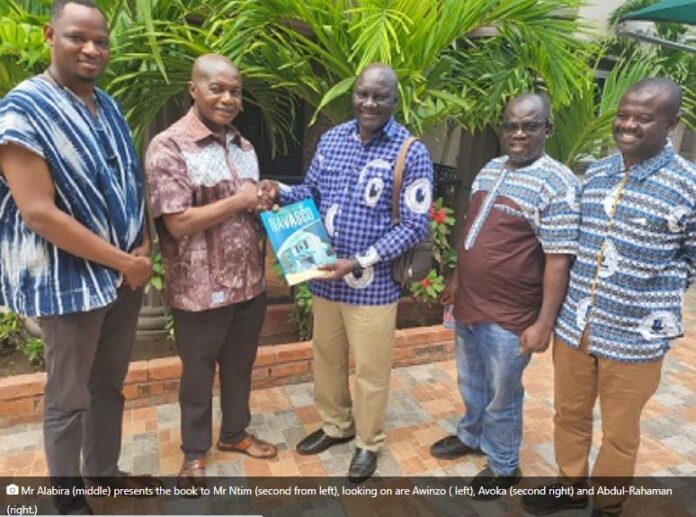 Old NAVASCANS Union, past students of Navrongo Senior High School (NAVASCO) in the Upper East Region on Saturday paid a courtesy call in Accra on the National Chairman of the New Patriotic Party, Stephen AyesuNtim, also an old student of the school, to congratulate him on his election to the position.

The old students who go by the title Nabia, meaning a prince or princess, presented to him a ‘Chronicle of Navasco’ book and invited NabiaNtim to this year’s Annual General Meeting/Speech and Prize Giving day scheduled for November 5 at Navrongo.

Mr Ntim, a member of the Accra branch, attended NAVASCO from1977 to 1979 with a Folio No.2983, for his Advanced Level, after his Ordinary Level at Asanteman Secondary School before enrolling in the University of Ghana.

The Global President of the Association, Nabia Ibrahim Alabira, commended Mr Ntim for his perseverance and determination that made him win the chairmanship after five attempts.

“We are delighted to see you at the top, we are indeed very happy you have taken up the challenge, we are very confident that as a Nabia you are up to the task, and we assure you of our support,” he added.

Mr Ntim recounted his political wilderness saying that the road had been tough, adding that the lesson he learnt after the long search for the party’s topmost position was to remain focused and loyal to one’s course.

He expressed appreciation to the union for the courtesy call and recalled his secondary school education in the North.

“I wanted to go to the north, that exposure was very important for me, after my  ‘O’ Level at Asanteman Secondary School,  so I chosed NAVASCO,  Lawra Secondary School and Nandom, and I got my first choice NAVASCO,” he recounted.

He described a former Headmaster of NAVASCO, Colin George Macdonald, a Scotish, as an “amazing character” who had made a “difference” in his life by making him a French teacher while in school.

Mr Ntim explained that Macdonald( Headmaster 1969-1980) made an arrangement and offered him a job as French teacher, like other seniors, while in the sixth form to teach the lower classes, the proceed of which was used to offset his school fees.

“For a whole year I will remain in school, I did not need to travel to South, the roads were not in very good shape and there was no mobile money transfer system,” Mr Ntim recalled with eternal gratitude to Mr Macdonald.

He added that years after school and as a politician he had traveled to all the constituencies in the North, not less than 20 times.

Mr Alabira briefed him about the memoir of Mr Macdonald, who is in his 90s, was writing in his home country in Scotland.

While in NAVASCO, Mr Ntim lived in Livingstone House, was a classmate of the late Supreme Court Judge, Justice Samuel Marful- Sam, and a year behind Ambrose Dery, the Minister of the Interior.