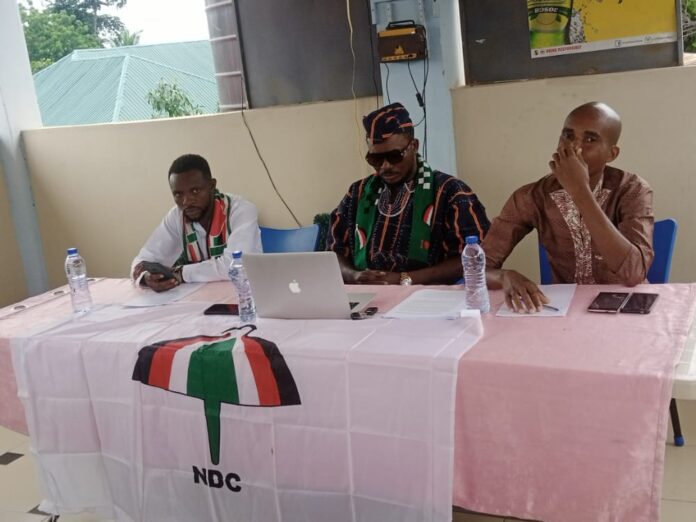 Some Branch Executives and members of the main opposition National Democratic Congress (NDC) in Kwahu Afram Plains North have issued a 5day ultimatum to their leaders over some important issues which might affect the party if not addressed.

Addressing journalists in Donkorkrom Monday 12th September 2022, the Branch Chairman for Kwaekese Bampoe, Mr. Ayitey Sampson who spoke on behalf of the group said it was an outright clarity of thought when the NDC decides to inaugurate the Branch Registration to grab a database of its members nationwide. 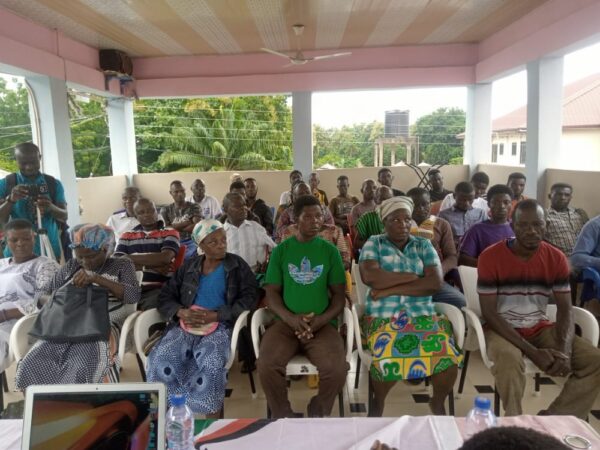 He added that “Unfortunately, this beautiful initiative of the NDC here in the Kwahu Afram Plains North is annihilating the party and will wreak more havoc on the fortunes of the party in the coming elections and beyond.

He accused the constituency chairman, the secretary, and some other executives saying these executives are engaged in acts that are only pernicious or pervasive but will lead to what no political party will wish in the long run. While some Branches have been denied access to their registration books for the two weeks window registration, others who were fortunate to access their books have had names of their members cleaned using correction fluid.’’

Read the full speech below

We members of the National Democratic Congress Afram Plains North welcome you men and women of the Press to this very important and urgent address.

This is the first time in the life of Afram Plains North NDC since 1992 that we branch executives have assembled the pain and anguish to use this medium in the channeling of our grievances. Afram Plains Is the food basket of the nation and also the Vote basket of the National Democratic Congress. In addition to the perennial problems that have bedeviled Afram Plains over the years, there’s now a colossal systemic failure on the part of the NDC in Afram Plains North; a Party that should be the ultimate alternative for the rotten Nana Akufo Addo-Bawumia leadership is now at a midlife danger in Afram Plains North.

1. PROBLEMS WITH THE BRANCH REGISTRATION BOOKS.
It was an outright clarity of thought when the NDC decided to inaugurate the Branch Registration to grab a database of its members nationwide. Unfortunately, this beautiful initiative of the NDC here in the Kwahu Afram Plain North is annihilating the party and will wreak more havoc on the fortunes of the party in the coming elections and beyond. The Constituency Chairman, the Secretary, and some other executives are engaged in acts that are not only pernicious or pervasive but will lead to what no political party will wish in the long run. While some branches have been denied access to their registration books for the two weeks window registration, others who were fortunate to access their books have had the names of their members cleaned using correction fluid. Even more alarming are cases where various pages of some branches were strategically torn away. All these self-inflicted discrepancies authored by some of the Constituency executives are targeted to disenfranchise their victims at the branch levels. To those cabals at the center of this heinous crime against party members, they have only one agenda, to eliminate perceived members who stand against their clandestine, unlawful, and evil agenda. To the NDC party at large, these victims are unable to pay their dues because their names have been cleaned, their ID Numbers changed and hidden from them.
Upon all the petitions that have been forwarded to the National Secretariat for redress, all of them yielded but nothing. No one has responded to us or even tried to call us in a bid to assuage feelings. The National leadership shares equally in the pollution of the guilt of these cabals, consciously associating with them and refusing to purify them.

2. REFUSAL OF NATIONAL AND REGIONAL DELEGATIONS TO MONITOR THE TWO WEEKS WINDOW REGISTRATION.
Ladies and Gentlemen, Men and women of the Press. We want to explain this clearly to Former President Mahama who serves today as the father and leader of the NDC in opposition. This will help Mr. Mahama to understand why the NDC is in opposition today. Since 1992, the Afram Plains North has had a smooth transition of power from one NDC Member of Parliament to the other by free, fair electioneering procedures. To the best of our knowledge, the Current Member of Parliament Hon. Betty Krosby Mensah is eyeing a third term after 8 successful years in parliament. It is apparent also that some National, Regional, and Constituency executives are aiding her third term. Those executives at National and Regional fronts are sacrificing party procedures and have technically refused to be present in the constituency for the two-weeks limited registration exercise. Despite all other 32 constituencies within the Eastern region have had a smooth registration plan for the Branch elections, only Afram Plains North was treated as if the party was under martial law. All attempts to get these National And Regional delegations to work in the constituency ended in stone. They blatantly refused to be here indicating that a higher authority was remotely controlling them. The Limited Two weeks window registration exercise ended on the 8th of September. A political quagmire?

3. COLLATION OF A NEW BRANCH DELEGATE REGISTER.
It is an ordinary reality and a natural law of succession in which one generation plays out its role and yields the stage for another, as a way of advancing the course of the human experience. Well, maybe not as much in Afram Plains North Here, there appears the notion of a divine right to leadership, which transcends the categories of time, and persists among a coterie, a ‘chosen’ breed, even in the face of changing norms and times. A monstrous phenomenon that encourages the creation of hate for the NDC party in which angry thousands of youths are cross carpeting to the Npp here at Northern Afram Plains.
After having successfully blocked the Regional and national teams from monitoring the registration of new members in a bid for the Branch elections, the member of Parliament Hon. Betty Krosby Mensah and her Constituency Secretary along with others have moved across all the Branches to collate their delegate register. An exercise that is illegal, and unlawful in the absence of a new election of branch executives. How did we arrive here as a party?

4. SEVERE DIVISION AND APATHY
Hardworking men and women of the Press, fellow party members, we would like to take this opportunity to remind His Excellency Former President Mahama and everyone else who wishes well for the NDC of the results of both NDC and NPP in the 2016 and 2020 Parliamentary elections.

Ladies and Gentlemen of the Press, the story at Northern Afram Plains NDC are not good. There’s mediocrity, there’s nepotism, there’s ineptitude, there’s incompetence, there’s propaganda, and there’s a dictatorship. Every year we are losing our members to the Npp due to these self-inflicted divisions.

Although the NDC here at Afram Plains North has habitually been plagued by bad leadership and corporate ineptitude, it has never been this bad. The party has never been divided along ethnic and religious lines as they are today.
The tension in the party is palpable with another poor -performance seemingly imminent. There’s anger, there’s anxiety, and there’s age-long resentment. There is something to be learned from the Political evolution in Hohoe Constituency in the Volta region where we kept our pot unwatched and our food now burns. The woes of Hohoe indeed started all this way until today when we have auctioned that seat to the NPP. We are not prophets of doom but the writings are clear on the wall.

We are fairly certain Ladies and Gentlemen, that when the Party attends to these seeming divisions and mafiarism intelligently at Afram Plains North, we could regain our past glory and power by finding a man who understands the subtle alchemic art of appealing to the people.

We use this medium to appeal to His Excellency Former President Mahama to help in these times of seething vortex of disagreements by assuaging feelings. It is also our plea that Mr. Mahama himself would ponder over the implications of these atavistic and anti-villain proclivities. As social democrats, we will be available for any committee that will be inaugurated with the foresight to rebrand and unite the party here at Afram Plains North. A committee that will work with systemic methodology, sangfroid disposition, and calculation minds, as cool as Cucumber.

Ladies and Gentlemen, Men and Women of the Press, Thank you and thank everyone for coming. God bless us all and the NDC.