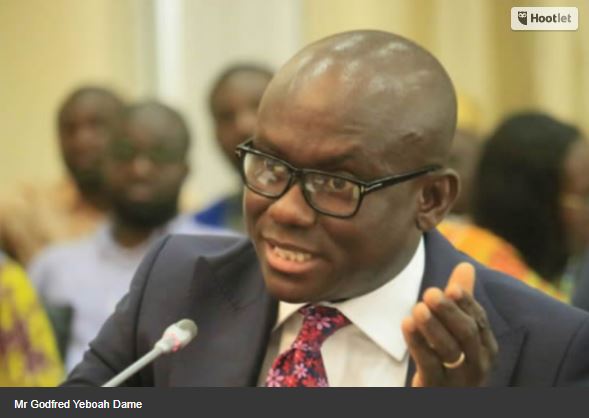 The office of the Attorney General and Ministry of Justice has fallen into quicksand in the matter of ownership of Big Stone Mining company as the AG’s uninformed order to the Ghana Police has exposed staff and assets of the company to danger from hoodlums.

The Attorney General, upon receipt of a petition from persons who are themselves wanted by the Police to assist in criminal investigations, without recourse to all parties involved, issued an order to the Inspector General of Police to withdraw his men from the mining site at Bogoso in Western Region.

Two of the Chinese nationals who petitioned the AG, Jiangdong Song, and Yi Liu are on the run for engaging in the presentation of fictitious documents to the Registrar General to alter the shareholding of the company.

The Attorney General in the letter stated that, “the police in terms of the rules of court, are not permitted to be part of execution process.”

“It is our opinion that if the allegations contained in the petition are true, the action of the police constitute a clear infringement on the rights of the petitioners and an unjust interference in the administration of justice by the police service, “ the Attorney General’s letter signed by a Deputy Attorney General and Deputy Minister of Justice, Alfred Tuah-Yeboah said.

“This development has the potential to unnecessarily bring the police service into disrepute,” stated the AG.

According to documents sighted by this portal, two Chinese partners, Yang Liu and Jiangdong Song had registered a company, Big Stone with 50:50 shareholding, with a third Chinese, Wan Shanhong acting as a Director/Secretary.

During their absence, Song, who is a 50% shareholder operated the company.

Due to the Covid pandemic and travel restrictions, the company director and secretary could not come back to Ghana until February 2022. However, the shareholder is still recuperating in China.

“After the arrival of the Director/Secretary and following several requests for accounts that had been ignored, they discovered that the 50% partner they had left in Ghana had not only removed them as directors and secretary of the company, but had fraudulently transferred the 50% shares of the other director to himself”, a source familiar with the situation and who wants to remain anonymous told this portal.

“This made him the sole shareholder of the company with all of these allegedly being achieved by forgeries of their signatures and the illegal swearing of oaths for the appointment of a director and the transfer of shares. The latter being very serious because both parties were not even in Ghana at the time of the swearing of these oaths”

On the 15th of July 2022 her Ladyship Justice Jennifer Abena Dadzie, granted Wan Shanhong and Yang Liu an Interlocutory Injunction to be in effect until the end of the substantive case.

The Registrar General was also directed to return the company registration to its original state by not acting on the forgeries presented to them. The Respondents, their agents among others were also not to operate the company.

“Taking into consideration the violence used in March 2022 to resist the execution of the Interim Injunction, the Judge ordered the IGP to provide assistance to them to ensure the Order was peacefully executed.

On August 18th 2022 they peacefully executed the order with the assistance of the Police and the Bailiffs. There was no time limit set on the Police assistance”, the source added.

Just a few days after the order from the office of the AG, hoodlums stormed the mining site to take over the assets of the company making the Police personnel on duty flee for their lives. 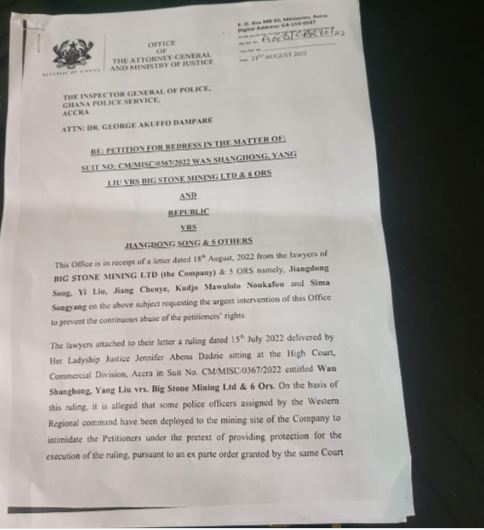 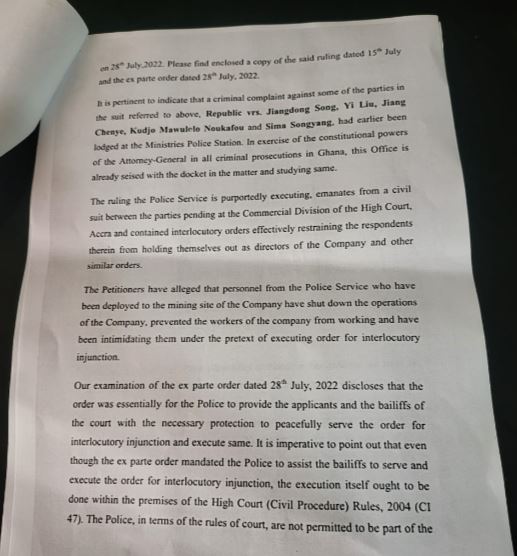 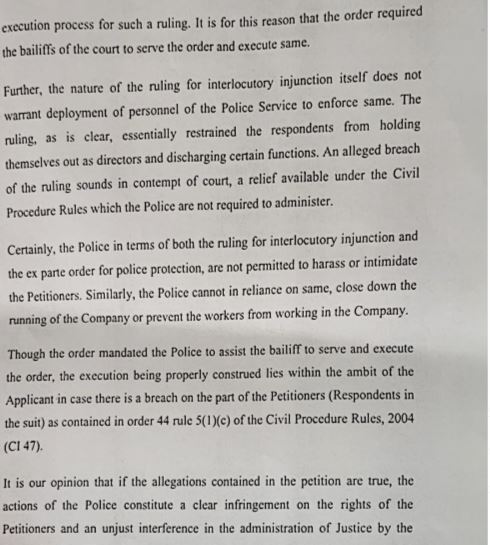 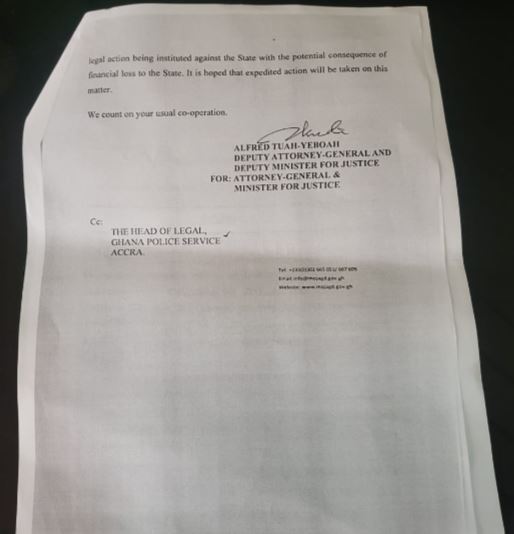