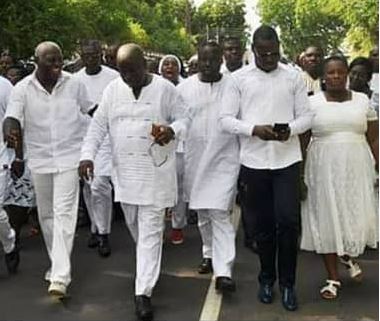 This is a man who only shares Flat-screen televisions allegedly as bribe to party executives to win Elections. One may ask is the Ade Television sets that he shares for just a few greedy people to win Elections better than the Dr Kwabena Duffuor’s Ahotor project. Most NDC members in the Greater Accra Regional are angry and fed up with him because he’s leading an agenda to deliberately deny NDC members in the Greater Accra Region of Dr Duffuor’s Ahotor Project that will generate income for the various constituencies.

Most of them have vowed to vote him out since he’s not in touch with the grassroots and constituents of the Party and always goes to them when he wants their votes for reelection. What angered most of them more was when they saw him flank the General Secretary of the NDC Mr Asiedu Nketia in a recent press conference over the Ahotor Project. His Anti-Ahotor Project stance.

They asked if Dr Kwabena Duffuor makes an Ahotor Project donation in the Ashanti region where does he Ade Coker come in. He was nodding his head like an agama lizard when Asiedu Nketia was speaking. Is he Ade the NDC chairman for the Ashanti region. When the Ahotor Project was launched by the NDC at the Greater Accra Region for the Korle Klottey constituency and others by Chairman Ofosu Ampofo and Asiedu Nketia, he Ade deliberately absented himself from the donation. Currently the Grassroots at the Party level are saying they will not exchange the Ahotor Project for his cheap television sets this time around.

And that if others in the Greater Accra Region have had their share during the launch then all other constituencies need theirs in the region. In 2016 when the regional Chairmen were being given Landcrusers he was not given one. It was not the Party that shared it. It was an individual financier who shared it. He was considered to be a mole and also was not deserving to lead the Greater Accra Region. They know him very well and he knows that they don’t trust him. It’s alleged that he used the Party to raise money for himself. Today he’s back claiming to be a John Mahama fanatic. So the Party members should let JDM go unopposed. Just because he wants JDM to identify him. This picture tells a story when Mahama was losing the 2016 elections as the Regional chairmen he didn’t have any clue, rather organised party members to dress up in white, move to Mahama’s house and lie to him that he had won. Meanwhile, he has never been for Mahama because he didn’t get the position he wanted. Rather he chaired both GIHOC and Ghana Export Promotion Authority Board where when the CEO left he arrogated the position of Acting Ceo to himself and was sacked.