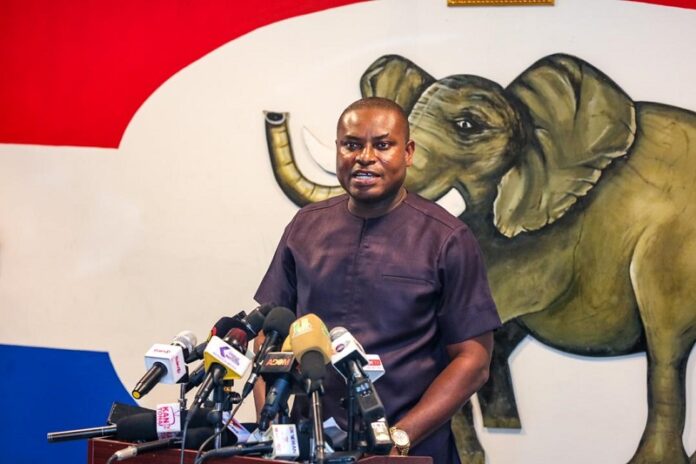 Mr Mahama has promised he will review ex- gratia and other benefits of Article 71 office holders and continue the review process of the 1992 Constitution started under late president Mills.

However, addressing a press conference on Wednesday, September 14, 2022, the Director of Communications of the NPP, Richard Ahiagbah said, “Mahama became president in 2012, barely a year after the acceptance of the recommendations of the Constitution Review Commission. All President Mahama needed to do was to present a draft bill to Parliament, per Article 290 (2), to trigger the amendment process. But as the talk master general, former president Mahama did not act on the white paper.

“Instead, he ignored the white paper to create and benefited from emolument committees- two of them. Mahama is the first living and serving president who added his spouse to the under-table payments, which used to be for widows of former Presidents only. How insincere and confused can a former President be if not for political mischief?

Mr Ahiagbah added, “There is something very cynical about the former president’s blatant falsehoods about his enjoyment of the privileges of Article 71 of the 1992 Constitution … we have assembled the relevant documentation that suggests former President Mahama is enjoying and has not been denied any of his article 71 guaranteed benefits.”

He rubbished Mr Mahama’s claim that he pays his own bills.

“These bizarre and downright false claims by the former president speak to a grand electoral strategy driven by desperation and deception.”

Mr Ahiagbah called on the former president to repudiate all the Article 71 benefits if he wants Ghanaians to take him seriously.

“If former Mahama wants to be taken seriously, he should go ahead and repudiate all the Article 71 benefits he has gladly enjoyed from 2013 to date. But trust me, former president Mahama will not renounce these benefits because he loves the provisions of Article 71,” the former Danquah Institute Executive Director said.