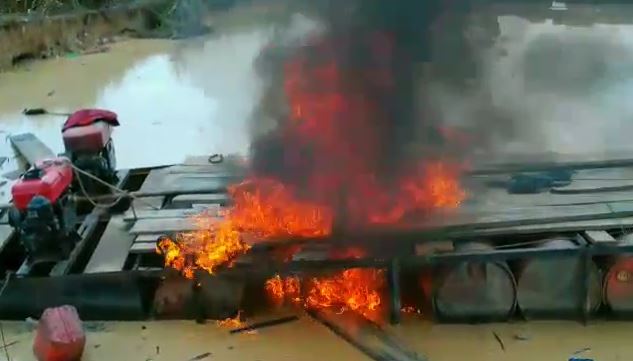 The Upper Denkyira West District Security Council in the Central Region has arrested 3 persons who were caught engaging in illegal mining along the Offin and Subin Rivers.

A total of 10 Changfai machines, water pumping machines, and other mining equipment retrieved from the suspects, were all destroyed to discourage other illegal miners from returning to site.

The District Chief Executive for Upper Denkyira West, Mr. Richmond Koduah, who led the operation in an interview with GHONE TV NEWS, said, the government is committed to ending illegal mining in the country and they will do anything humanly possible to help the government to succeed in his quest to end the illegal activity.

“We found a group of young men engaging in illegal mining activities on the Offin and Subin rivers respectively and we swiftly proceeded to the area to cause their arrest,” he told newsmen.

Hon. Koduah warned recalcitrant individuals and groups in the illegal mining business to shun their harmful activities as anyone caught would not be spared.

He made a passionate appeal to the government to support the District with equipment to fight illegal mining.