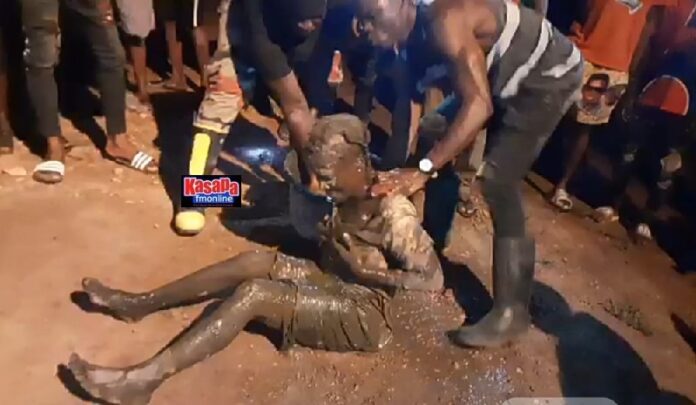 Chiefs and Elders of Enyan Asempanyin in the Ajumako Enyan Essiam Central Region have refuted the claim that a woman who went missing and was found in a pit latrine was banished from the town.

According to the Chief and the Elders, the woman was taken away from the Enyan Asempanyin Community by her own family to seek proper health care for her.

Speaking to Kasapa News, Yaw Boagyan, the Ebusuapanyin of Enyan Asempanyin, Buabeng Essel explained that the landlord of the victim, Yaa Prah rather sacked her from his house which compelled her family to take her to her hometown, and not the Chief that sacked her from the community.

He on behalf of the Chief and Elders of the town appealed to the general public to disregard the claim that they banished the woman for ‘drowning’ in a pit latrine.

If will be recalled that Kasapa News Yaw Boagyan reported on August 31st, 2022 that a woman who had gone missing for three days had been found in a public pit latrine at Enyan Asempenyin in the Ajumako Enyan Essiam District of the Central Region.

She was rescued after a young man who had gone to use the public toilet heard the voice of a woman screaming for help.

He’s said to have rushed and informed the community members about the incident following which a distress call was placed to the Breman Essiam Fire Station after which officers arrived at the scene, and broke the hole at the top to create a wider opening for her to come out.

The woman who claims she was traveling was rescued with her bag containing money.

The Fire Commander for Ajumako Enyan Essiam District, DO3 Augustine Cudjoe in an interview with Kasapa News Yaw Boagyan expressed on how it was possible for the woman to ‘drown’ in the 12-feet pit latrine since the hole is narrow for her to go through.

She was given a good bath after she was removed as she was smeared with feces.

The woman is currently receiving treatment at the Ajumako Government Hospital, while the Ajumako District Police Command commences an investigation.