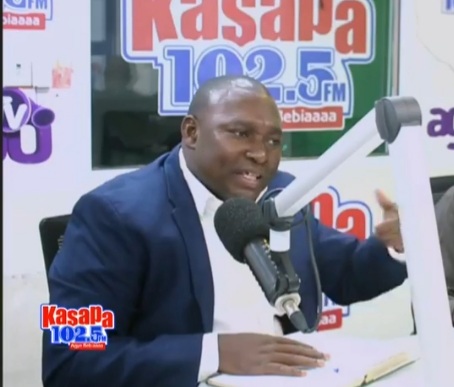 A member of the Communications Team of the governing New Patriotic Party(NPP) Charles Owusu says the grounds on which President Akufo Addo sacked the former Minister of State at the Finance Ministry, Charles Adu Boahen is wrong.

According to him, it was wrong for the President to sack the former Minister solely based on the content of a video put together by Investigative Journalist Anas Aremeyaw Anas in his latest exposé, when the accused person has not been given a hearing.

President Akufo-Addo on Monday sacked Mr Adu Boahen after he was captured in an undercover documentary by Tiger Eye telling a supposed Arab investor that the Vice President needs an appearance fee of only USD 200,000 for him to avail himself and offer his support to an investor.

This was when he was asked by the supposed businessmen on how an investor can get the attention of the Vice President and what must be given to him when finally in his presence.

“You mean, like appearance fees and stuff? I mean he, himself (the Vice President), if you give him some (USD) 200,000 or something as a token, as thank you, appreciation, that’s fine. He’s not really, he’s not really (like) that. All he needs is to worry about his campaign money in 2020,” Charles Adu Boahen revealed.

But commenting further on the issue on Kasapa 102.5FM/Agoo TV Wednesday, Solomon Owusu insisted that the President was unfair to Charles Adu Boahen as he shouldn’t have been ‘pronounced’ before he was heard.

“Charles Adu Boahen is not my friend and indeed I don’t want to know him and I think he should have been sacked long ago. But, I think we’ve not been fair to him in relation to his dismissal. The basis for his dismissal is wrong. Anas has gone to do his investigation and has put together a video. He edited the video and did a voice-over privately before publicly screening it. I’ve not seen it anywhere in the world where someone is pronounced guilty before the person is given a hearing. The person has already been disgraced publicly.

“The President based his sacking of the former Minister on the Anas video. But I ask, what investigations have been done on the video to prove that all that Anas has alleged against the former Minister is true? What took place before the money was given to the former Minister? All we saw in the video was Charles Adu Boahen receiving the money. Why were portions of their engagement in the hotel room edited from the tape? Why didn’t we take our time to study and investigate the content of the video,” he asked?

Solomon Owusu added: “In any case, if we are basing on what is in the video to sack Charles Adu Boahen, does it mean the President believes that the things Charles said in the video are true and has exposed the Vice President that he takes $200,000 as appearance fees? So now that the President has asked the Special Prosecutor to investigate Charles Adu Boahen and it turns out that the video was edited to disgrace the former Minister, how are we going to remedy the disgrace caused him? Why the rush in sacking him before giving him a hearing or having him investigated?