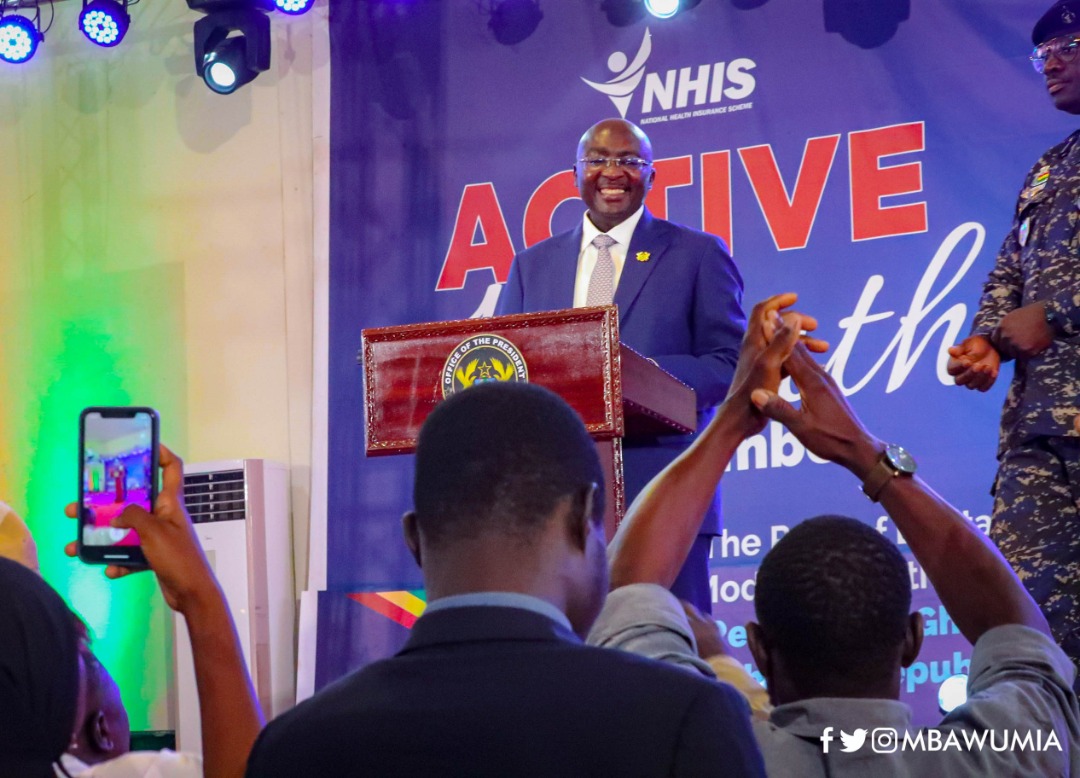 Ghana is on the verge of running one of the most digitalized healthcare systems in Africa, with many digital interventions scheduled to be fully nationally on stream by the end of 2024, Vice President Mahamudu Bawumia has indicated.

According to Dr Bawumia, this has become possible due to the several digital interventions introduced since 2017, as well as the massive infusion of digital technology into existing operations, which has led to greater access to healthcare services as well as revolutionized healthcare delivery.

The Vice President made the disclosure while speaking on “The Role of Digitalization in Modern Healthcare Delivery: Recounting Ghana’s ICT Journey in the Fourth Republic” in Tamale at the launch of the National Health Insurance Authority’s ‘Active Month’ celebrations on Monday, December 5, 2022

“The Government of President Akufo-Addo since January 2017 has been at the forefront of providing improved public service delivery using digital solutions. One key area we have been pursuing aggressively is social and health services delivery to the population.

“The role of digital health solutions in our healthcare sector cannot be overemphasized. Over the last few years, we have embarked on digitalization drive in the health sector as a response to the World Health Organization (WHO) call for member countries to implement digital health interventions in their health systems to improve access to care and well-being for their populations,” he explained.

Digitalization
Outlining some of the digital interventions introduced so far, Dr Bawumia stated:
“Early this year… we launched a digital health solution in the pharmaceutical space, called the National Electronic Pharmacy Platform (NEPP), where clients can use their mobile phones to order their prescriptions to be delivered to them at the comfort of their homes.

“This digital innovation is also meant to check counterfeit or substandard medicines and help eliminate them in our Pharmacies and chemical shops. It will also help the menace of drug abuse. The technology developer is currently engaging the National Health Insurance Authority on the technical and operational feasibility of the platform in the NHIS. We are also enrolling the top 100 pharmacies. Government is very keen on getting the platform fused into the NHIS operations by January next year. This will make Ghana the first country in sub-Saharan Africa to have a nationwide E-pharmacy.

“Government has also introduced flexibility through the Lightwave Health Management Information System (LHIMS) and other technological platforms to manage electronic medical records without the use of printed booklets of patient’s folder and avoid the possibility of patients’ medical records getting lost.

“So far, 147 hospitals have been networked, including the Teaching Hospitals, such as Tamale, Cape Coast, Komfo Anokye, Ho and Korle-Bu, as well as many secondary and primary health facilities, making patient records available to all these facilities without the use of folders. By end of next year, we will have networked about 80% of all hospitals, and by the end of the following year, we will complete the networking of 100% of all our hospitals. This will make us the first country in Africa and one of a few in the world to have such a nationwide system.”

He continued: “Government’s introduction of the Zipline services in 2019 to improve medical supplies has expanded from one distribution hub to six hubs in the remote areas, making Ghana, home to the world’s largest fleet of medical-delivery drones.

“Zipline drones have undertaken 278,936 flights since their inception, making over 12 million deliveries, comprising of 8.63 million lifesaving medical products or medicines, about 1.9 million child immunization vaccine consumables and over 1.9 million COVID-19 vaccines and PPEs. It has also made very significant savings for the nation, both in lives and resources,” he revealed. The Vice President noted that Ghana’s medical drone delivery service is the largest in the world and saving many lives daily.

Lauding the management of the National Health Insurance Authority for infusing digitalization into the operations of the NHIS, Vice President Bawumia said the Scheme, since its introduction, has no doubt, contributed to increased utilization of healthcare services, leading to improved health outcomes of the population.

“The NHIS has gone through several reforms over the years to improve its services to the members. On 9th November, 2019, I personally launched the NHIS- Ghana card linkage at the Accra International Conference Centre and today, over 5 million members of the NHIS have been linked to their Ghana Cards to enable them to use the Ghana card to access healthcare since 1st of May, 2020.

“Hopefully, when all members of the scheme are linked to their Ghana Cards, the NHIS card will be phased out and the Ghana Card will be the sole card for accessing healthcare services in the credentialled healthcare facilities.

“Aside this, Government has also embarked on a project, together with the National Identification Authority (NIA), National Health Insurance Authority (NHIA), Ghana Health Service, and Births and Deaths Registry, to link births and deaths data to the NIA database to give unique identification numbers to all newborn babies starting first quarter of next year.

“The NHIA has implemented electronic medical claims (Claim-IT) to reduce turnaround time for claims preparation and submission and reduce spurious claims and cost to the scheme for increased sustainability.

As well, healthcare providers wishing to join the scheme can now apply using an online application system, reducing the turnaround time for processing the applications as well as saving cost of paper applications with copies of accompanying documents such as certificates and travelling cost.

The NHIA is also updating its database with the locations of all facilities by picking the GPS coordinates in line with the Government’s Agenda on address system to ease communication and assessment, according to officials of the Scheme.

The launch in 2018 of the NHIA Electronic receipting platform to enhance social auditing and accountability of revenue collection at NHIA district offices across the country has helped to establish daily premium collection and improve accountability and transparency in revenue mobilization, NHIA officials say. It has also substantially promoted electronic reconciliation of financial account and promoted transparency and efficiency in the financial operations of the scheme.

Highlighting other digital interventions, such as the introduction of a mobile renewal system to enable old members whose cards have expired to conveniently renew their cards using mobile phones, and the launch today of an improved portal dubbed “MyNHIS app” which allows new members to register using the Ghana Card, Dr Bawumia challenged the NHIA to continue to introduce digital innovations in other operational areas of the scheme to improve services for the members.

Meanwhile, the Ministry of Health and its allied agencies are also seriously brainstorming on telemedicine, making it possible for Ghanaians to receive medical advice via their phones and other devices.

This, coupled with the many interventions in the provision of healthcare and the impending roll-out of the National E-Pharmacy platform has truly set Ghana on the path of having one of Africa’s most digitalized healthcare systems, Dr Bawumia declared.