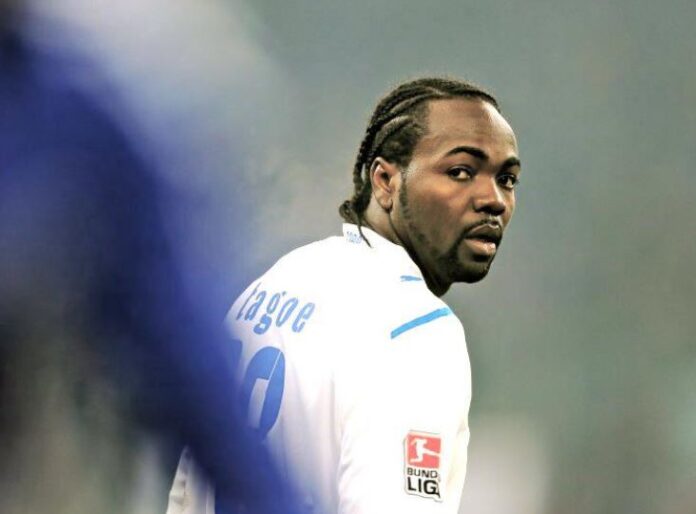 The Circuit Court in Accra has finally granted bail in the sum of GHc100k to embattled former Ghana International footballer, Prince Tagoe who has made an additional GHc59k to the GHc70K he made on December 23.

Despite being remanded to reappear on January 4, his lawyers have managed to convince the court to have him admitted to bail on his third time of asking on Friday, December 30, the last working day of the year 2022.

In addition to the bail sum, he is to produce three sureties, one of whom the court said should be a civil servant.

Another of the sureties the court said should be justified with landed property whilst the other could be an ordinary Ghanaian.

According to EIB Network’s Legal Affairs Correspondent, Murtala Inusah, the former Black Stars and Hearts of Oak striker has paid additional GHc59, 000 in addition to the GHc70, 000 earlier paid to the court on December 23.

Prince Tagoe popularly known as Prince of Goals would celebrate the New Year with his family if he meets the bail terms.

The former Ghana Premier League goal king who was charged for defrauding by false pretense of former footballer George Antwi Boateng to the sum of $40, 000 equivalent to GHcGHc265, 200, had pleaded not guilty.

He was first arraigned and charged on Wednesday, December 21, and remanded by the Circuit Court presided over by His Honour Mr Samuel Bright Acquah.

His second bail application moved on December 23 was also turned down but he was lucky on his third attempt on December 30.

On Friday, December 23, two days after his first appearance, Prince Tagoe, through his new lawyers led by Lawyer Kwesi Kwakye paid an amount of GHc70k to the court as part payment of the said money.

Prince Tagoe was not present in court when the case was called. But his lawyers were present while Chief Inspector Agartha Abena Asantewaa represented the prosecution.

On December 21, the Prosecutor, Chief Inspector Agartha Abena Asantewaa told the court that the complainant is George Antwi Boateng, an Ex-Ghanaian footballer based in Germany.

Whilst the accused person Prince Tagoe is also an Ex-Ghanaian footballer who also once lived in Germany.

Chief Inspt. Asantewaa said, the accused person immediately agreed to import the vehicle for the complainant at a cost of $40.000.00 USD equivalent to (GHc265, 200).

She said on January 8, 2021, $40,000 USD was paid into the accused person’s First Atlantic Bank Account No. 0016531332032 which accused person acknowledged receipt through a phone call to the complainant that the money had hit his account.

She told the court that the two weeks expired but still, the accused person was not able to import the vehicle as promised.

According to him, on April 27, 2021, the complaint came down to Ghana to receive his vehicle but to no avail and when the complainant called to demand his vehicle, the accused person stated that he could not import the vehicle but rather used the money for his personal pressing issues.

Pastor jailed 8yrs after being found guilty of 173 charges