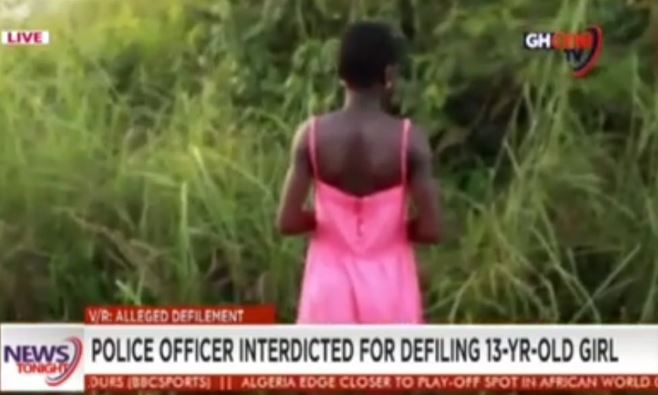 A 14-year old girl who was allegedly defiled by a police officer at Ave-Xevi in the Akatsi North District of the Volta says she has been subjected to mockery and harassment from other adults in the community.

The victim, was allegedly defiled by Sergeant Emmanuel Duah, popularly known as Bob Marley -a police officer who was deployed to a police barrier situated at Ave-Xevi on the Ho-Aflao road in September, 2021.

The victim, according to reports was lured into a yet to be commissioned police post by the suspect and was defiled twice.

But following the incident, the victim in a recent interview says she has become a subject of mockery from her peers at school.

She said, “When I go to school, my colleagues call me names like Bob Marley’s wife. I get angry and want to fight them, sometimes too, I feel like not going back to school.

“But the teachers have made announcement to them to stop calling me that name and so they are now scared,” the victim told Starr News’ Faisel Abdul-Iddrisu.

This claim has also been corroborated by the school authorities who have had to issue a caution statement to the pupils against such behaviour.

The 14-year old victim -an orphan, who stays with her aunt, also told the reporter that she has been exposed to paedophiles who harass her constantly around town.

“Sometimes, when I go to town, some people [mostly adults] also call me Bob Marley’s wife. Some also approach me and say things like since Bob Marley did it, I should allow them to do it too.”

“These things get me scared -I hear people say Bob Marley has been coming to the town and so when I’m sent to town in the night, I refuse to go.”

The victim’s Aunt, expressed worry over the delay in commencement of prosecution of the case.

She said, “This issue happened since September last year. The last time we heard from the police was when we were invited to Sogakope, somewhere October, 2021. Since that time till now, we have not heard anything from the police.”

“We are poor people but the state must stand up to protect all of us. This issue has dragged on for too long and I’m not happy but I’m helpless. My daughter deserves justice but I’m so helpless and don’t know what to do,” she added in her local Ewe dialect.

But a year on, the police in a response to an RTI request submitted to the Volta Regional Police Command by Starr News’ Faisel Abdul-Iddrisu, on 13th October, 2022 say the suspect has been charged with the offence of defilement.

The letter dated 15 November, 2022 also indicated that the original case docket has since been returned to the office of the Attorney General, Volta for further action.

The letter from the Regional Command also confirmed that the suspect, Sergeant Emmanuel Duah was interdicted on October 15, 2021.