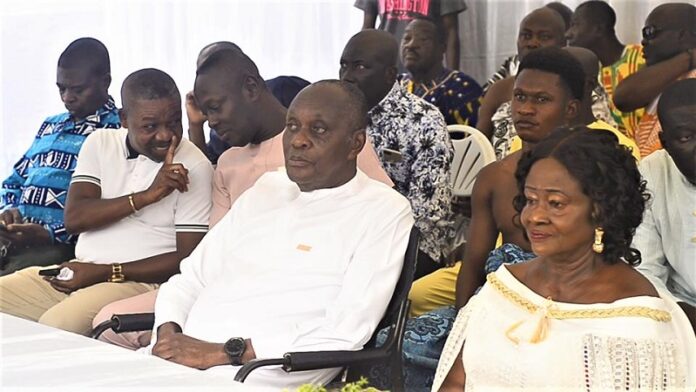 Omanhene of the Juaben traditional area in the Ashanti Region Daasebre Otuo Serebour II, has pointed out poor work attitude and plain thievery as the biggest factor running several businesses aground in Ghana.

The Chair of the Council of State made the assertion at the opening of the Christal Palace Gardens, a hospitality and recreational center in his traditional area.

Dasebre Otuo Serebour II minced no words stating that entrepreneurs with noble intentions of establishing businesses have had to learn the hard ropes working with callous workers who spare nothing at stealing and ripping them off.

“It’s very painful when a worker feels he is rather doing you a favor after toiling to establish an enterprise. They will steal everything and not give a care if the business collapsed,” he observed.

“I will not be surprised if some of the persons to be employed here will charge monies from persons who patronize this facility and pocket it. They will lie that no one had come for a service,” he bemoaned.

He warned that investors will be compelled to shy away from sinking their money into job creation avenues if such acts continue to fester in the country.

The Christal Palace Gardens which hosts a swimming pool, a sky bar and a fifty room residential facility is expected to boost the economic potential of Asante Juabeng and its adjoining communities.

The facility which is yet to see its second phase of construction is also targeted at attracting holiday makers, corporate bodies and institutions who will require recreational spaces; conference rooms and residencies for their activities.

Mining Consultant and CEO of the new facility Nana Biribireba Boateng challenged government to endeavor to create an enabling environment that encourages the establishment of new businesses.

Nana Boateng called for the state to take another look at the processes, taxes, fees and charges demanded from investors and entrepreneurs even before their businesses kick off.

He averred, “Business owners are really suffering in Ghana. It is only in Ghana that you are frontloaded with all kinds of charges even before you crystalize and commence your business.”

“Half of your startup capital ends up in the hands of government. As government asks several people to go into entrepreneurship, we plead that it also softens its tough hands on people who show intentions of establishing, “He added.

The Education Minister, Dr Osei Yaw Adutwum who graced the commissioning asked Ghanaians to pray to God to support the president Nana Akufo Addo with good dreams ideas to steer the country out of its economic doldrums.